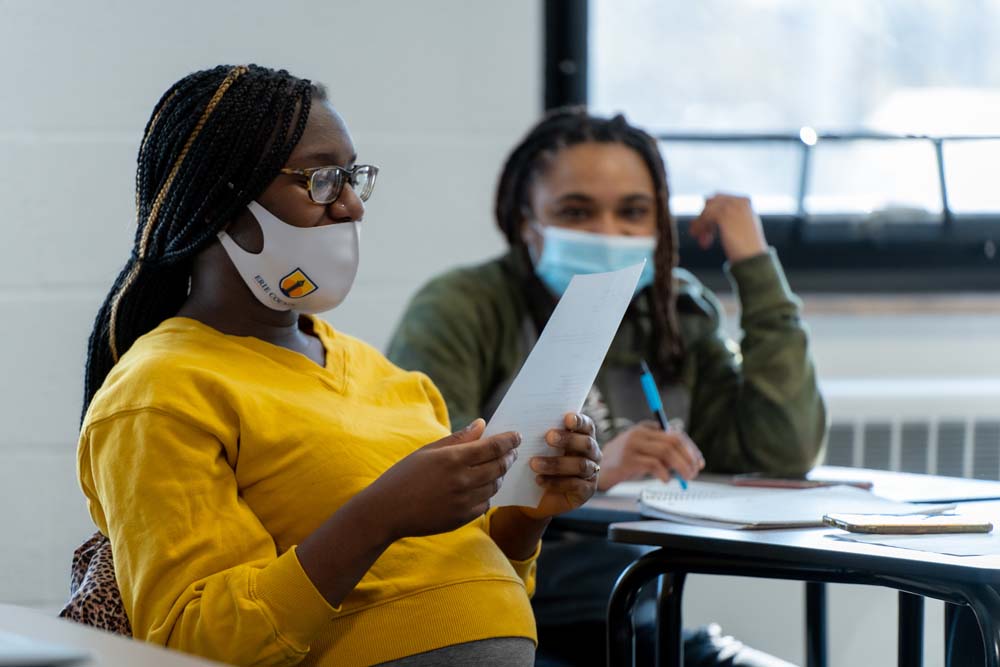 “Rarely do we find men who willingly engage in hard, solid thinking. There is an almost universal quest for easy answers and half-baked solutions. Nothing pains some people more than having to think.” – MLK

Next week, we honor the Reverend Doctor Martin Luther King Jr. and his legacy of fighting against racial oppression. A national holiday established in 1983, the day allows us as a people to pause and celebrate one of America’s greatest leaders. It also, I argue, presents us with a time to reflect on the ideals that Dr. King so vociferously advocated for and ultimately gave his life trying to bring to fruition. In this week’s blog, I ask you to join me in what may seem like random, stream-of-consciousness thoughts, but these are ideas that I embody at my core as a teacher and that guide me as a leader as we build the infrastructure of Erie County Community College.

It has been more than fifty years since Dr. King was assassinated, and many of us weren’t even alive during his life. However, all of us are impacted by his legacy. King is most remembered for his work on the push for civil rights – his work to slowly bend the arc of time toward moral justice. But, remember, Dr. King was also a scholar. As a child, I was mesmerized by his ideas, by the way he captivated audiences in his speeches, by his expansive mind, and by his way with words.

In junior high, I had the honor of reciting a portion of his Letter from the Birmingham Jail for my classmates. Mrs. Litherland, my teacher, fawned over Dr. King’s use of words and imagery. She showed us how Dr. King harnessed the power of language to challenge beliefs and assumptions while simultaneously calling people to action. But mind you, this was in the late ‘80s in rural America. There were students who openly challenged King’s intelligence and place in American history. One childhood friend’s family used to refer to the holiday as James Earl Ray day. When I challenged my friend, his retort, clearly passed down from his parents, was to allege that King wouldn’t be celebrated if he hadn’t been assassinated. As an adolescent, I didn’t have the intellectual sophistication to adequately challenge this argument, but I knew in my heart that it was wrong. Racism was alive and well in my world, and I knew that  I needed to be more well-read and more articulate — and, frankly, braver — in order to stand up and try to counteract the racial attitudes that surrounded me.

And this is where King’s ideas on learning and growing rang true for me: accepting as my personal truth that the arc bending toward justice is slow and deliberate and that the jokes, innuendos, and sometimes blatant remarks were just plain wrong, I realized that I needed to learn all that I could about racial injustice and the civil rights struggle. And what a journey that has been! Some forty years later, I am still trying to learn and realizing how much I still don’t know. I have made it part of my ethos to become more aware of my privilege and the many barriers that those with less privilege face.

As I have explained previously, I grew up poor in a small town in central Illinois, so my barriers were largely socioeconomic and surmountable with study and education. Let me share a few recent examples to demonstrate how other barriers disproportionately affect underserved groups. This month, the Secretary for Education called for colleges and universities to change the practice of withholding transcripts for students who owe money to their institutions. He argues that this disproportionately impacts students of color and students who are experiencing poverty. In fact, this action of withholding transcripts can actually cause the financial burden of education to compound. A student who owes College X money but is now attending College Y and is unable to get a transcript showing courses completed due to financial reasons may have to repeat courses at College Y, thereby causing even more debt to accrue! Transcripts are also often required for grants, loans, or even employment. Essentially, these practices penalize the poor. (For those of you whose nose just crinkled, I recognize that personal responsibility and honoring one’s obligations are also important, but I do not believe this needs to be a binary choice; please reread Dr. King’s quote above). The existence of Erie County Community College itself will help here in achieving parity; the Hechinger Report shared that the average debt at community colleges equals $631, but for students at four-year colleges, that debt is $2,335. In our effort to achieve fairness to all students, EC3PA will continue to be intentional and to recognize how policy decisions can impact students, especially the underserved. We are committed to policies that promote equity and inclusion.

Privilege is a contentious theory to some. Let me stipulate that I believe privilege is a sliding scale, and every single person holds some form of privilege. Let me also try to exemplify privilege using less controversial metrics than race or socioeconomic status. Let’s use a downtown Erie example. Recently, I was walking on State Street, and a man began screaming over my shoulder in my ear. I wasn’t sure if he was screaming at me as his words were incoherent. I experienced an instant of brief panic. I was momentarily afraid, but then, my own particular privilege kicked in. I am a large man trained in self-defense. Just knowing that I could, potentially, defend myself if I needed to allowed me to calmly assess the situation and recognize that the man was having his own mental health issue and was not actually a threat to me. But what if I weren’t 6’3” and 230+ pounds? What if I haven’t been studying Taekwondo for over a decade? What if I hadn’t received some basic training in mental health awareness and conflict de-escalation techniques? All of these things gave me a slight advantage over others who did not have those traits or training (AND, at the same time, afforded me less privilege than someone with more training in addressing mental health issues).

Understanding privilege and how it plays out in real-world situations is crucial to us as we work to perpetuate Dr. King’s legacy. Discovering that well-intentioned policies and procedures often pose barriers to people with different life experiences and situations is critical to establishing a just higher education model. I once taught with a colleague who locked his door when his watch reached the hour that class was to begin. He argued that he was teaching students to be on time. He may have been, but he was also punishing those who were late because the bus was running late or the parent who got stuck in the drop-off line at school. He was inferring malice and disrespect on the part of his tardy students rather than recognizing his own privilege as a man who earns a substantial income and has no restraints on his time or mobility. He couldn’t see another perspective. Equity isn’t easy; there are no half-baked solutions. But, we owe it to our students. We owe it to Dr. King’s legacy to keep up the fight.  Monday and always, work to bend that arc.